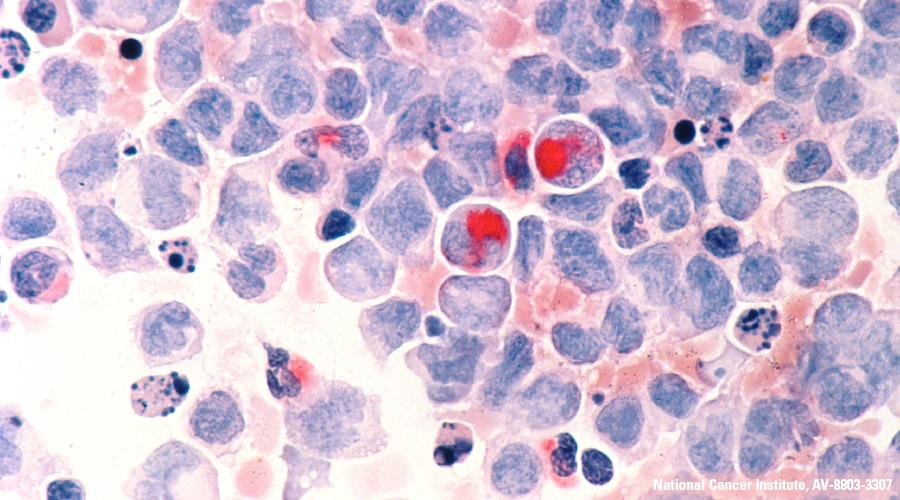 SBI’s lentiviral reagents and miR services help researchers bridge the gap between GWAS and phenotype at a QTL involved in hematopoiesis and acute myeloid leukemia.

Moving from genome wide association studies (GWAS) to the identification of specific elements responsible for a biological process or disease can be challenging, especially when the associated phenotypes are diverse and complex. Detailed studies of the function of regulatory elements, such as non-coding RNAS, as well as the genes in the region are needed, which can take time and may still not account for all of the observed phenotypes.

Fortunately, new data can often point researchers in the right direction, which is how Maharry, et al.,1 were able to identify miR-3662 as a functional driver of the phenotypes associated with the quantitative trait locus (QTL) at chromosome 6q23.3, a locus known to be involved in hematopoiesis and leukemias. During a review of the latest findings about the 6q23.3 locus, they found a newly annotated miR, miR-3662, embedded in an intron of one of the three genes at this locus, the HSB1L gene. Through a series of studies designed to tease apart the role of miR-3662 in hematopoiesis and hematopoietic malignancies—including miR-3662 overexpression and knock-down in healthy cells, malignant cell lines, primary leukemic blasts, and small animal models—Meharry, et al.,1 were able to show that miR-3662 is the source of the phenotypes associated with the SNP rs66650371, implying that higher levels of miR-3662 promote erythroid differentiation, and that overexpression of miR-3662 in both AML cell lines and primary leukemic blasts from AML patients resulted in reduction of proliferation and increased cell death.

“…In the past decade, numerous GWASs based on SNP arrays have illuminated our understanding of genomic space and enabled us to connect many human traits back to their underlying genomic changes. However, often the association of an identified locus with the observed phenotype cannot be fully explained by the action of the genes located in the genomic region. While early association studies mainly focused on the coding genes in identified regions, long-range enhancers and non-coding RNAs are now also considered as potential causative mechanisms.”1

The Challenges: Going from GWAS and QTLs to functional elements can be challenging, as the phenotypes my result not only from genes but regulatory elements, such as non-coding RNAs. For studying hematopoiesis and hematopoietic malignancies, the challenges also lie these difficult-to-work with cell lines that are transduce poorly.

The Current State: Previous work had shown the importance of the chromosomal locus 6q23.3 in hematopoiesis and hematopoietic malignancies, but studies on the three genes in this region could not sufficiently explain all of the phenotypes associated with SNPs in this region.

The Advances: In their paper, “Dissection of the major hematopoietic quantitative trait locus in chromosome 6q23.3 identifies miR-3662 as a novel player in hematopoiesis and acute myeloid leukemia,” Meharry, et al,1 report a comprehensive set of studies that detail the association of a newly annotated non-coding RNA, miR-3662, with erythroid differentiation and show that higher levels of this miR in AML cell lines and primary leukemic blasts can reduce proliferation. Thus, miR-3662 is a newly discovered regulator involved in hematopoiesis that may be a target for anti-cancer agents.