SBI’s Exo-NGS exosomal RNA sequencing service makes it easy to expand your biomarker research to include exosomal RNAs, no matter your exosome or NGS experience

CONTACT US TO KNOW MORE ABOUT OUR CUSTOM SERVICES

For many researchers interested sequencing exosomal RNA—whether it’s for biomarker discovery and profiling, or addressing other research questions—it may seem like there are too many hurdles to overcome to get to the data: How much sample is required? What’s the best way to isolate exosomes? Does this data look right?

Fortunately, SBI is here to cut through your uncertainties by providing a customized service with full levels of support. Whether you’re an exosome expert or brand new to the field, SBI’s Exo-NGS™ (Exosomal RNA-Seq) services can accelerate your biomarker discovery and profiling. 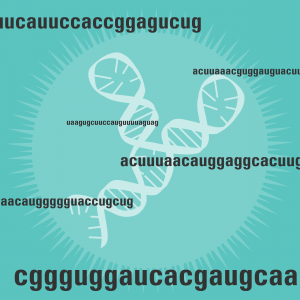 Because we’ve been working with exosomes for years, we can reliably and reproducibly isolate exosomes from almost any biofluid—from plasma and tissue culture media to CSF, synovial fluid, and even mouse bronchial alveolar fluid (a challenging sample where exosomes are concerned!).

And more importantly for exosome RNA-Seq, we routinely generate high-quality exosomal RNA libraries from as little 1 ng of total RNA, which is unparalleled given the challenges of obtaining high-quality RNA from exosomes. SBI can overcome these experimental hurdles to deliver quality and meaningful NGS data from your exosome samples.

Lastly, but not least, looking beyond the data, we can provide what your average NGS company cannot: the expertise of working with exosomes and exosomal biomarker samples. We’ve run thousands of samples and know what to expect from exosome RNA-Seq studies. We don’t just deliver raw data, we provide analyzed files and typically spend time with you reviewing your results and providing expert insights into your data, a value-add that is rare in this industry. Still not sure? Take a look at the data below, and then contact us and we’ll be happy to answer any questions before, during, or after your Exo-NGS service—email services@systembio.com.

Step 1. Contact the services team for a quote by emailing services@systembio.com.

Step 2. Send us your samples.

Step 3. Get your data files and a web-based presentation of the findings.

How do we get quality NGS data from such small amounts of RNA? It starts with the library prep. The standard methods for preparing RNA libraries often results in a large overlap between adaptor dimers and exosomal RNAs (Figure 1A). However, at SBI, we’ve modified the library prep to better separate the exosomal RNA from uninformative adaptor sequences (Figure 1B). The result is more usable sequencing reads from lower amounts of RNA as seen by the number (Figure 2) and percentage (Figure 3) of usable reads as well as the number (Figure 4) and percentages (Figure 5) of mapped reads. Fewer adaptors and more exosomal reads mean better insights from your data. 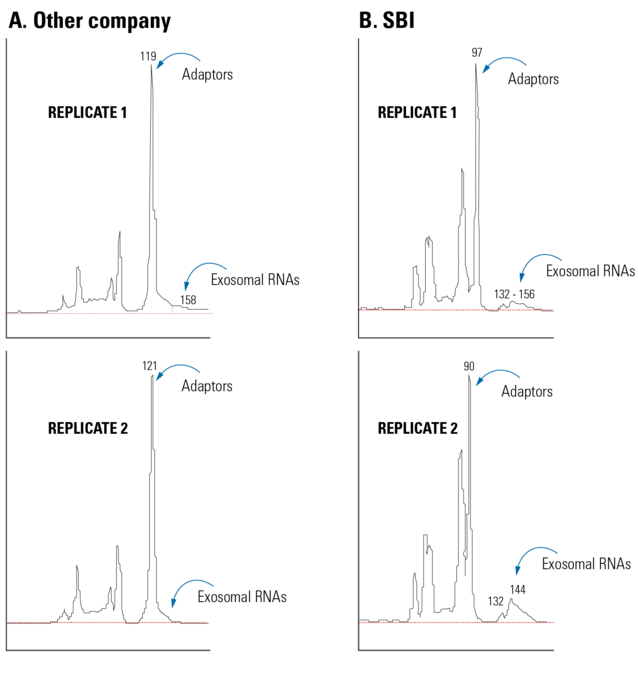 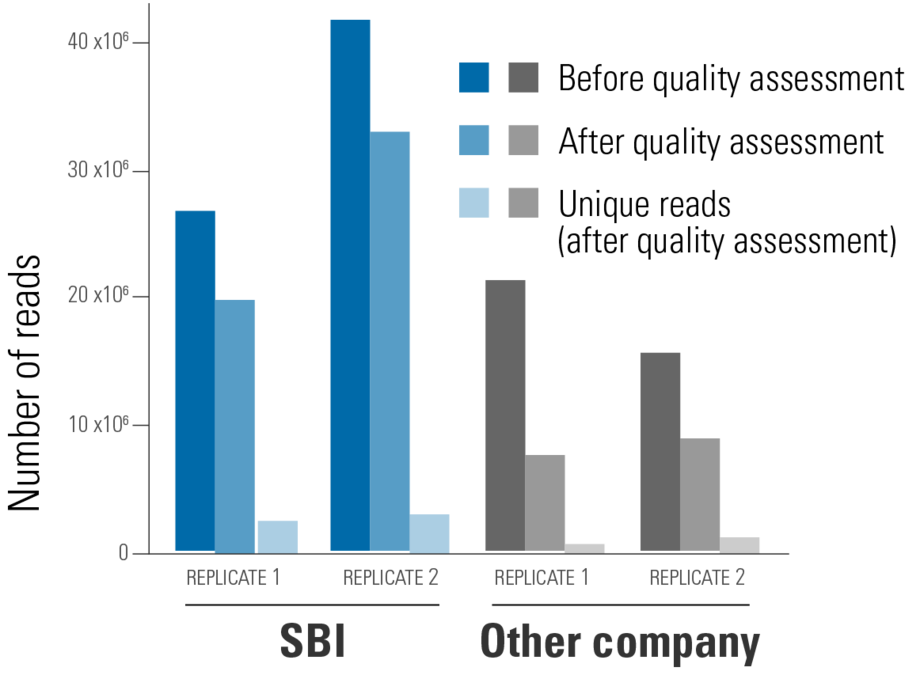 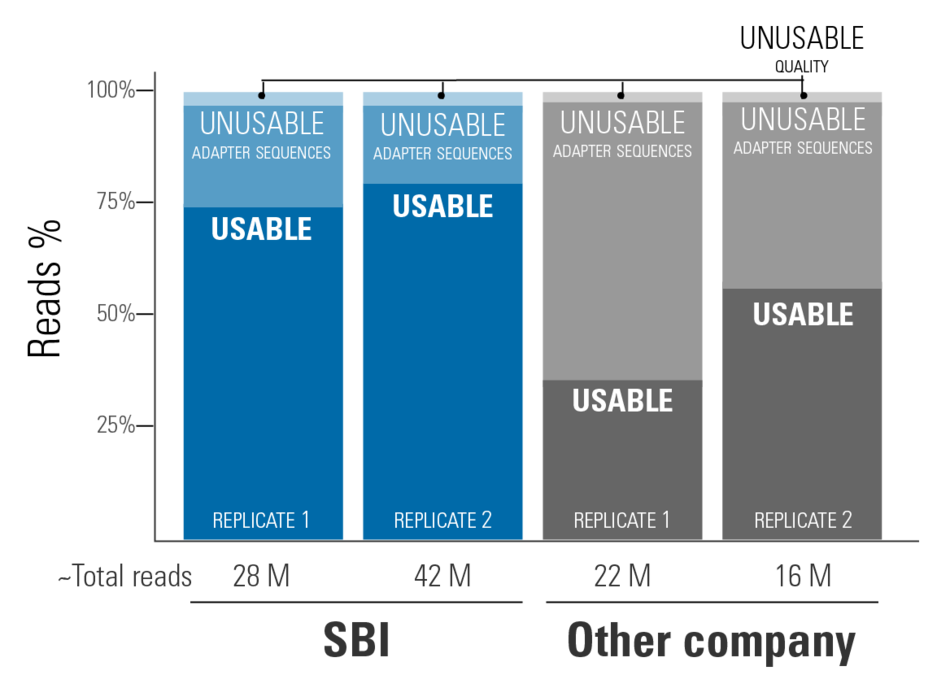 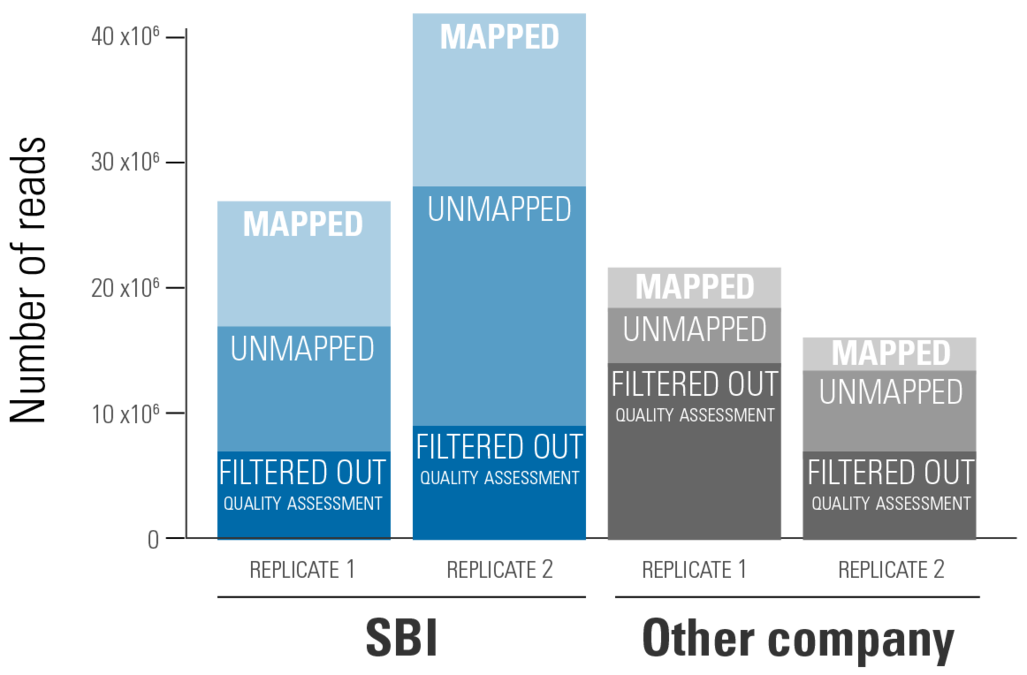 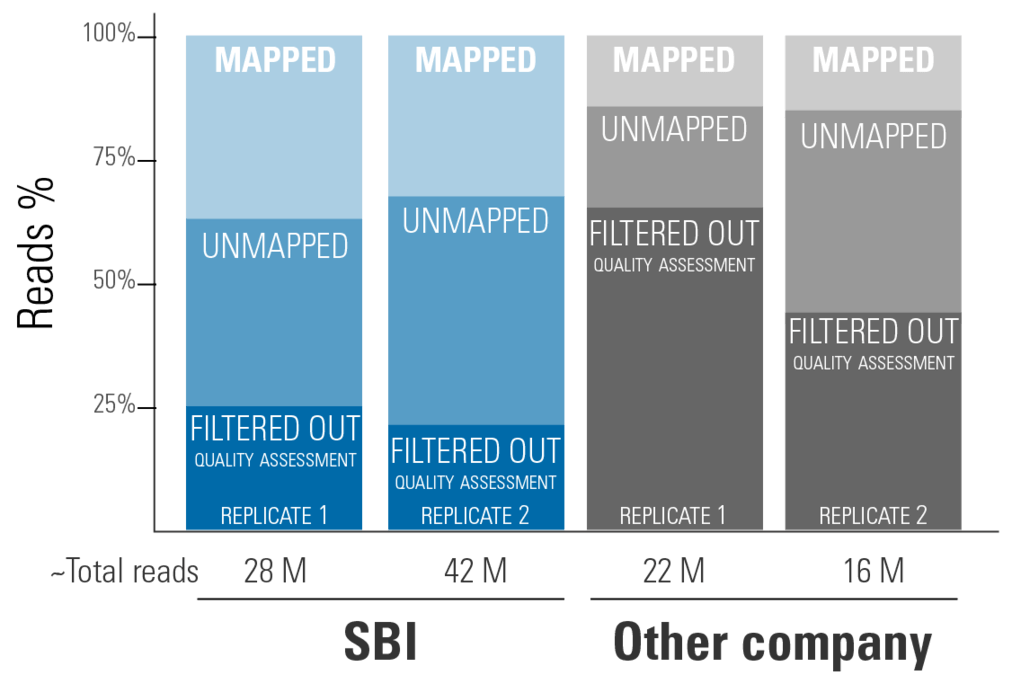 CONTACT US TO KNOW MORE ABOUT OUR CUSTOM SERVICES

Save time and speed your research with SBI’s RNA services. We can take care of mRNA synthesis, miRNA & lncRNA profiling, and miRNA precursor and anti-miRNA expression vector construction, and more.